America’s highways and airports are increasingly congested. Our nation’s transportation system remains dependent on oil. And our existing transportation infrastructure is inadequate to the demands of the 21st century.

Intercity passenger rail can help America address each of these challenges. Most major industrialized countries have (or are now building) well-functioning intercity rail systems. High-speed trains traveling from 125 mph to 200 mph or more have long served residents of Europe and Japan, and China is currently in the midst of building a $293 billion, 10,000-mile high-speed rail system.

Now, for the first time, the federal government has invested significant resources toward the development of high-speed rail in the United States, with an $8 billion allocation in the American Recovery and Reinvestment Act (ARRA) and $2.5 billion more in Congress’ fiscal year 2010 budget.

States across the country are hungry for improved passenger rail. Indeed, states have requested seven times more money for passenger rail improvements than was allocated under ARRA. And that figure does not include many other important and worthwhile projects that were not requested because they were further away from being “shovel-ready.”

State requests for passenger rail funding under ARRA – coupled with the broader agenda for high-speed rail development articulated by the Obama administration – present a powerful vision for the future of transportation in America, touching virtually every region of the country.

• Passenger rail curbs congestion on highways and in airports, saving travelers time, money and aggravation. The Center for Clean Air Policy and the Center for Neighborhood Technology estimate that completion of a national high-speed rail network would reduce car travel by 29 million trips and air travel by nearly 500,000 flights annually. That is more flights than depart each year from Atlanta’s Hartsfield-Jackson Airport, the nation’s busiest.

• Passenger rail will boost America’s economy. The task of building out the nation’s high-speed passenger rail network is estimated to create up to 1.6 million construction jobs, and can provide a needed shot in the arm for America’s struggling manufacturing sector. Economic growth is also spurred by making travel easier between cities, fostering regional business connections and encouraging exchanges of information in the emerging “knowledge economy.” Investments in passenger rail can moreover reduce the need for costly investments in highways and airport capacity.

• Passenger rail can provide convenient, efficient travel, where riders can work, relax, enjoy greater legroom, and travel directly from downtown to downtown, even in inclement weather – avoiding the need to drive to outlying airports, wait in long security lines, or jostle for parking in congested center cities.

• Passenger rail protects the environment. The Center for Clean Air Policy and the Center for Neighborhood Technology estimate that a national high-speed rail network would reduce global warming pollution by 6 billion pounds, the equivalent of taking almost 500,000 cars off the road. 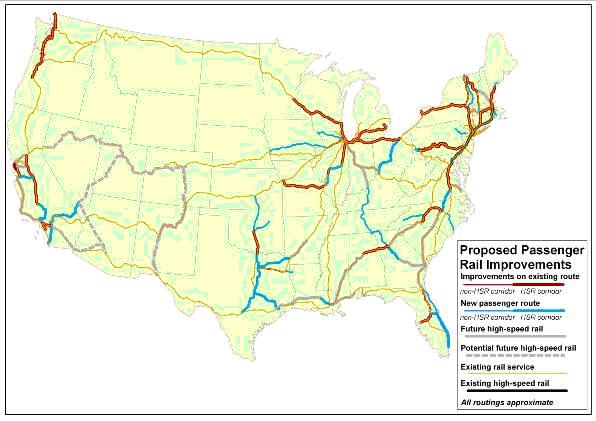 Investments in passenger rail can benefit virtually every region of the United States. State requests for funding under ARRA would begin to deliver many of those benefits.

• In the Northeast, proposed investments would extend the region’s already successful rail network to new locations, such as Scranton, Brunswick, Maine, and the cities of Massachusetts’ South Coast. Planned investments would also speed up trips on New York state’s important Empire Corridor from Buffalo to Albany, and Pennsylvania’s east-west Keystone Corridor from Pittsburgh to Philadelphia, providing important links in a regional high-speed rail network and serving as an effective alternative to flying or driving along those routes.

• The Southeast would benefit from extending successful near-high-speed service along Amtrak’s Northeast Corridor further south, to Virginia and North Carolina. North Carolina also plans to improve and expand rail service between Charlotte and Raleigh – reducing congestion in one of the fastest-growing regions of the country. Finally, the Southeast’s plan for high-speed rail would restore Atlanta to its historic status as a passenger rail hub, linking the city with rail lines running northwest to Nashville, northeast to Charlotte and Washington, D.C., west to Birmingham and southeast to Savannah and Jacksonville.

• Florida is seeking to build the first truly high-speed rail system in the United States, with an initial network linking Tampa, Orlando and Miami. Trains traveling at 165 mph or more would bypass traffic on the state’s congested highways and link together many of the state’s biggest attractions. Florida is also seeking to restore rail service along its East Coast, providing new service to important coastal destinations.

• The Gulf Coast states are pursuing the restoration of passenger rail service east of New Orleans that was disrupted after Hurricane Katrina. Over the long term, the states are looking to build a modern passenger rail network with links between New Orleans and Baton Rouge to the north, Houston to the west, Birmingham to the northeast, and the Florida Panhandle to the east.

• The proposed Texas “T-Bone” high-speed rail network would serve as a core for improved passenger rail service throughout the South Central region. The “T-Bone” network – running from Dallas to San Antonio and east to Houston – would serve fast-growing metropolitan areas with more than 15 million residents. Additional connections would include high-speed service between Texas, Oklahoma City and Tulsa, and an eventual high-speed rail connection with Little Rock.

• The Midwest already has extensive rail lines, which states are seeking to modernize, creating a regional network of efficient passenger rail routes with Chicago as the hub. St. Louis, Kansas City, Cleveland, Detroit, Milwaukee, Madison and Minneapolis-St. Paul would all enjoy convenient connections with Chicago – and each other – with a revitalized regional rail system. Building the system is estimated to create over 152,000 person-years of work and 57,000 permanent jobs.

• In the Pacific Northwest, ridership on Amtrak’s Cascades line between Eugene, Portland, Seattle and Vancouver, B.C., has increased eight-fold over the past 15 years. Further improvements to the line will reduce travel time and add round trips, attracting more than 3 million passengers a year and relieving congestion on crowded Interstate 5.

• California’s high-speed rail system, one of the most comprehensive and modern networks planned in the United States, will be a big step forward in addressing the state’s problems with traffic and air pollution. The network will provide the efficient travel between California’s major cities that the state’s large population and economy require, with multiple trains per hour stopping in all of the state’s largest cities and traveling at top speeds over 200 mph.

Recent investments in passenger rail have already paid off in higher ridership.

• Over the last decade, Amtrak ridership has increased by 26 percent, with an additional 5.6 million passengers per year riding intercity rail. Despite the economic downturn, Amtrak served a record number of riders in the last three months of 2009. Ridership on regional commuter rail lines has increased as well.

• The creation of near-high-speed service between Boston and Washington, D.C., has resulted in rail capturing nearly half of the air/rail travel market in the Northeast Corridor.

• Initiation of 110-mph service along the Keystone Corridor between Harrisburg and Philadelphia has contributed to a tripling of ridership on that line over the last decade.

• Faster service along the Chicago to Detroit corridor has led to a 24 percent increase in ridership over the past five years, despite the region’s severe economic downturn.

• Similarly, increases in frequency of service along the Chicago to St. Louis line contributed to a doubling of ridership over a five-year span.

The United States should build an efficient and fast passenger rail network, with high-speed rail as a central component, to help address the nation’s transportation challenges in the 21st century. Eleven key steps toward achieving that goal are as follows:

• Maximizing “bang for the buck” by investing in lines with the greatest ridership potential and using incremental, short-term improvements in passenger rail to help lay the groundwork for eventual faster high-speed service.

• Balancing private investment with public safeguards – Harnessing private investment can help to deliver high-speed rail improvements, but the public must retain control over key infrastructure and decision-making, and any private deals should be undertaken only with full transparency and accountability. Wherever possible, new rail lines should be built on publicly owned right of way. Public investments in privately owned tracks should be tied to agreements to secure greater priority for passenger trains.

• Investing to achieve full benefits by refusing to cut corners in new rail investments, particularly with regard to investments that can improve energy security, environmental performance, and safety.

• Building stations in the right places, where passengers have access to a variety of transportation options for completing their trip and where passenger rail can provide a catalyst for transit-oriented development.

• Assuring transparency in all aspects of the decision-making process over passenger rail, including the expenditure of funds and contracting.

• Managing for performance by collecting and publicizing data on ridership, energy consumption, safety and other aspects of rail service, and setting concrete goals for the achievement of specific targets in each of these areas.

• Encouraging domestic manufacturing to supply the equipment needed for the build-out of the nation’s passenger rail system and make America a leader in an emerging global technology.

• Setting standards for high-speed rail equipment so that the nation can benefit from economies of scale.

• Encouraging cooperation among states, and between states and the federal government, in the development of high-speed rail.

• Measuring progress against a vision. The nation should set an ambitious goal for the development of the nation’s rail system. We call for linking all major cities within 100 to 500 miles of one another with true high-speed rail by mid-century. Whatever the goal, it should be set and progress measured against its attainment